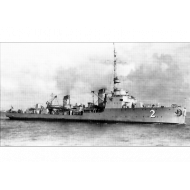 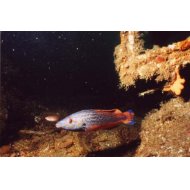 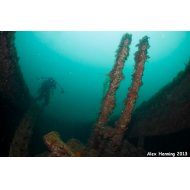 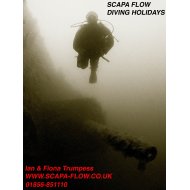 In my opinion the F2 and Barge is one of the best wreck diving sites in the Flow, two wrecks for the price of one and in only 15 meters of water, this makes for an ideal second dive of the day.

F2 was built by Germaniawerft at Kiel in 1936, although she looks like a Destroyer she was actually a light escort vessel or Geleiteboot. Her design was an experiment at the time as she was fitted out with high-pressure boilers.

She was later lengthened by four metres and converted to a torpedo recovery vessel at Wilhelmshaven in 1938/9.

She sank at her mooring in a storm in 1946, and was later sold on to Metrec Engineering in 1967. The company used the wooden salvage barge YC21, but she also sank in a storm on the 15th of November 1968.

We normally start by dropping the divers in on the barge YC-21 first, the reason being it's much easier to find the rope that joins the two wrecks together from the barge than from the F2.

The barge sits upright in a depth of around 15 to 16 meters of water.

Within the hold there's a set of 20mm anti aircraft guns pointing up to the surface, there are also various other bits and pieces of pipe salvaged from the F2. On the starboard side there is an old generator and some old gas cylinders used for cutting.

The outside of the barge on the starboard side is very nicely covered in dead mans fingers.

There's a line connecting the barge to the F2, this can be found near the stern on the port side.

A short swim of about 20 meters and you have reached the wreck of the F2, on a good day you can even see the wreck looming out in the distance.

The F2 lays on her port side at the same depth and rises up to 8 meters. Keeping the wreck on your left hand side you are now swimming along the keel side of the wreck, continuing in this direction you will see the bows start to rise from the seabed.

If you come round the bows to the fore deck and look up you can see the 4.1 inch open backed gun turret pointing forward and the anchor chain running out of the haws pipe where the other shot line is normally tied in.

From this position keeping the wreck on your left your now swimming toward the stern of the vessel. Although everything aft of the bridge section was blasted in the salvage operations back in 1967, there are many interesting features in this area, rolls of cable, deck cleats, bollards and the stern post is still visible.

You can see just about everything on this dive, small shoaling fish, cod, ling, conger, wrasse.
A great dive site for scallops, queenies, crab and the occasional lobster.