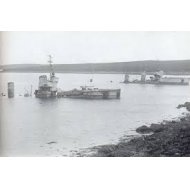 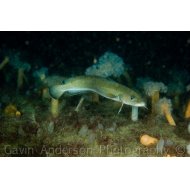 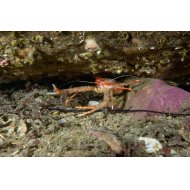 A very easy shallow dive, the V-83 sits upright on a slope with a maximum depth of 15 meters at the stern and gradually shallows up in towards the beach where she becomes very broken up.

V83 was a motor torpedo boat destroyer built in Hamburg and launched in 1916.

She formed part of the VII Flotilla and was involved in night attacks on the English Channel.

During the scuttling of the German Fleet she was boarded by the British Navy and she was beached on the east side of Rysa Little, along side the G-92 which was later towed away to be scrapped.

The V-83 still lays in her original position and was not used in the salvage operations of the Hindenburg, although there was an unsuccessful attempt to raise her in 1926.

Sitting on an even keel with a slight list to port the maximum depth attainable on this dive is 15 meters. There is seldom any current on this wreck and makes for a very easy dive.

There is a nice 3.4 inch gun which points up to the surface and another which lies further forward surrounded by wreckage.

Edible crabs and lobster, king and queen scallops often make an appearance on the deck after a dive on this wreck. Ling, conger and wrasse are common.

There's usually a small seal colony on the beach and interactions with divers are also common.