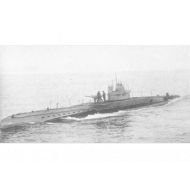 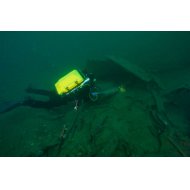 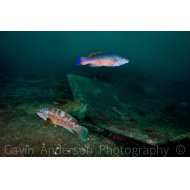 This wreck lays in 27 meters and is very broken up and scattered along with part of the hull containing the engine area. You can still see the Hydro Planes at the stern with lots of lead and pipe around and some very nice brass worming gear, there is a lot of brass laying around. The bottom consists of sand, and various pieces of gear including a deck winch with the drum buried in the sand. Steel frames sticks out of the sand poking up into the water and the whole wreck is very picturesque.

UB-116 was the last U-boat to be sunk in British waters during world war one. On the 28th October 1918 she managed to penetrate Scapa Flow through Hoxa Sound, she was detected by hydrophone listening equipment and a string of mines connected to the shore were detonated, a total loss of life of 34. It's said that the next morning the hydrophones picked up a tapping noise coming from the sub.
The Navy sent a diver down by the name of Miller, after the conning tower had been blasted open, he entered the wreck to find all the bodies dressed in officers uniform. He found a pile of leather suitcases which he prised open to find them full of civilian clothes and money. Was there a plan to escape, as the war was coming to an end and it was obvious that Germany was going to loose the war.

She was later raised in 1919 and scuttled in her present position Panhope Bay. In 1975 the salvage diver Keith Jessop famous for raising the gold from HMS Edinburgh, was up in Orkney working, they were raising copper bars from the wreck of the Johanna Thornden. A salvage team from the south of England had turned up in St Margarets Hope, they had bought the rights to the UB-116 for seven shillings and sixpence. They set a number of charges on the wreck but unbeknown to them there were still live torpedoes in the forward tubes, the explosion went ten fold. The trawler they were using had stood off the usual safe distance, but the explosion was so intense that one of the crew who was standing on a hatch ready to take a photo of the explosion was thrown up in the air along with the hatch cover he was standing on. The explosion had cracked the engine bed and not a single toilet bowl or wash hand basin was left intact. The news of this caused Jessop immense amusement as they would have been rivals.

The shot line of this wreck is normally at the highest part close to the conning tower which sits upright and has a small port hole in the side. We quite often dive this site with a slight to moderate current which allows for good visibility and fish life and giving you the opportunity to go for a wee drift.