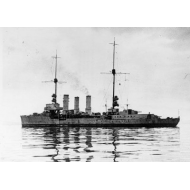 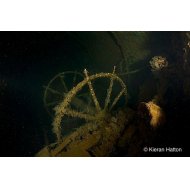 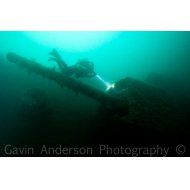 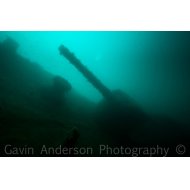 The Cöln lies on her starboard side in 34-36m, with the top of the wreck at around 22m.

She is in very good condition with lots of life and very little current, the shotline is usually tied in at the lifeboat davit at around 22 meters making for a very easy dive, and usually our first dive of the week.

SMS Cöln was a Cöln class light cruiser and one of only two ships of this class to be completed. The other is her sister ship SMS Dresden.

There has been some confusion over the years as to the spelling, is it Cöln or Köln? Ok Köln is the name for the town Cologne, Cöln is the correct spelling as this can be clearly seen on the ship’s bell at the Lyness museum on Hoy.

SMS Cöln saw little action except for mining and a bit of patrolling in the German Bight.

On 21 November 1918 SMS Cöln arrived in the Firth of Forth and then continued north for internment in Scapa Flow.

The shot line on the Cöln is usually tied to the lifeboat davit directly over the bridge section.

Descending down you come to the bridge section with it's armored control tower and range finder, behind this you will notice the breach on a 5.9 inch wedge in gun under the deck with the barrel pointing up to the surface, no one seems to know why it's there or how it got there.

Moving towards the bows with the wreck on your left you come to a raised deck hatch, the guns from the fore deck are missing, a large hole allows access to what was once the crews quarters.

Anchor chains can be seen running up and out of the hawse pipes, circling the capstans and then disappearing down the spurling pipes.

Just after the bridge section at midships the wreck has been heavily salvaged and reduced to rubble, continuing to move aft the hull becomes intact again. You then come to the two aft 5.9 inch guns both pointing aft and one of which is raised over the other.

Lots of small shoaling fish cover the wreck, we have even had complaints from diver that they couldn't see the wreck for the fish.

There are quite often seal pups playing around the shot line making those deco stops a little more enjoyable.