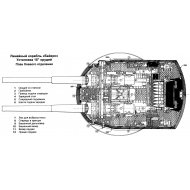 The Bayern turrets are the four turrets left behind after she was salvaged by Cox and Danks in September of 1934.

The vessel was interned into Scapa Flow in November 1918 and was scuttled on 21st June 1919.

The Bayern was salvaged by Cox and Danks in September 1934, as the ship was raised turrets fell free off the ship. The ship was towed to Rosyth and scrapped in 1935.

This is a fantastic dive which many of our regular customers ask for, it really does brings home the scale of the engineering.

The turrets lay in a maximum depth of 38-40 meters of water.

There are four turrets in total A & B turret know as Anton and Bruno to the west and C and D turrets known as Caesar and Dora to the east.

The shot line is normally tied in on the eastern turrets as these are the most intact of the four.

The top of the barbatte raises to around 23 meters.

The ball bearing centering ring is in situ and are very well preserved.

It is possible to enter the armoured gun house near to the seabed and see some of the features inside the turret.

The breach of the guns can be seen, but as with all the German Fleet wreck the firing mechanisms were removed prior to internment.

It is possible to swim from the eastern turrets C and D to the western turrets, the distance is approximately 50 meters and there is a piece of cave line joining them that you can follow.

Close to C turret there is a section of mast.

The A & B turrets to the west are more damaged due to the first failed attempt at salvage.

When they lost the lift and the ship came down to rest, it pushed over the barbette of A turret which now lies horizontal to the seabed, the ball bearing ring was also damaged when this happened.

Small fishes, conger and ling can all be found, an abundance of dead mans fingers, sea urchins, crab, lobster,king and queen scallops.