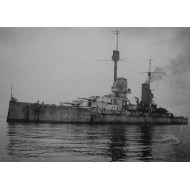 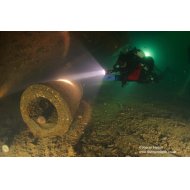 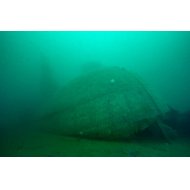 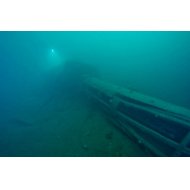 The Kronprinz lays upturned in 38 meters of water with her port side uppermost and rises to as little as 12 meters at its shallowest.

The ship was a König class Battlecruiser, one of four ships of its class.
The other three being König, Grosser Kurfürst and Markgraf.

In March 1917 the Kronprinz was also rammed by sister ship Grosser Kurfürst, starting to become a bit of a habit. The impact allowed tonnes of water to flood forcing her back to drydock in Wilhelmshaven for repairs.

The Kronprinz took part in the Battle of Jutland, and was part of the vanguard fleet, she suffered no damage or loss of life.

The Kronprinz lays completely upside down with her port side uppermost, the shot line is usually tied in at the stern directly over the aft turrets. Decending down to the port side of the wreck you reach the seabed at around 38 meters, keeping the wreck on your right arm, you are now moving towards the stern of the wreck. You will notice the deck rises to around 5 meters from the seabed due to her resting on her D and E Turret. This is a sight that everyone wants to see, keeping good bouyancy and fins in an upward position its possible to move under the deck to see the barrel of D Turret laying half buried in the silt.
Keeping the barrel to your right arm and moving aft under the teak deck you now come to E Turret and can see the two barrels forced into the deck. Care needs to be taken in this area so as not to stir it up and keep good visabilaty for the next buddy coming in for a look. You now need to turn around 180 degrees keeping the turrets on your left for the exit.

For those of you on single cylinders, this is probably going to be enough for you, so by keeping the wreck on your right arm and starting to ascend around the stern, you will come to the rudders and the blasted area where the propellers used to be. This is a lovely scenic area and a great way to de-fizz in the shallows.

For those of you on twin sets and rebreathers, after visiting the aft turrets and keeping the wreck on your left arm you are now moving forward so you can take in the seven 5.9 inch casement guns as well as the armoured spotting top.

A turret is still accessible and you can swim in and see the breach, but B Turret is no longer accessible but it is possible to see the barrels laying under the wreckage, as you continue to move forward you come to the bows which are laying flat to the seabed.

Small shoaling fish, pollock and cod, lots of ling and conger, lobster, edible crab and velvets, king and queen scallops, squat lobster, sea urchins, many different types of starfish, plumos anenomie. There is a wealth of dead mans fingers of all different shapes and colours can all be found at this impressive wreck site, infact its pretty hard to find a space to lay your hand in some areas.