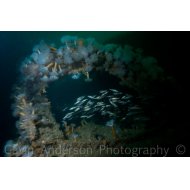 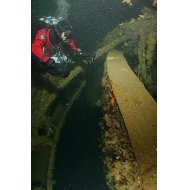 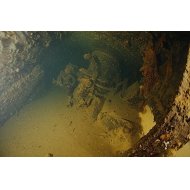 Today this wreck lies completely upside down with her bows pointing in a northerly direction.

The König sits in 40 meters of water with the hull rising up to 24 meters, this offers something for almost every level of diver.

She is the most damaged of all the German fleet wrecks due to the extensive salvage operations by Nundy's (Metal Industries). For that very reason she makes for a most interesting dive, as this is the only wreck where we're allowed to view the internal workings of these mighty battleships.

Laid down in 1911 and launched in 1913, the König was one of four König class battleships of the Imperial High Seas Fleet. She was commissioned in 1914 and led the Fleet at the Battle of Jutland.

She did start off life with a wee bit of bad luck during December of 1914, firstly by running aground in the Kaiser Wilhelm Canal, and then by being rammed in the arse by sister ship Grosser Kurfürst.

König was involved in the heaviest of the fighting during the Battle of Jutland. At 7.32pm on the first day she was hit and listed to port.

She had suffered 10 heavy and six medium-calibre hits, 45 men were killed including one officer and another 27 men were wounded.

On the 6 December 1918 the König along with the cruiser Dresden were the last two ships to arrive at Scapa Flow for their internment. Unlike the majority of the German High Seas Fleet scuttled in June 1919

The König lies completely upside down and has been the most heavily salvaged of all the fleet wrecks which gives the opportunity to see the engineering behind the scenes.

The shot line is normally tied in at the blasted area after mid ships, keeping the wreck on your right arm you are now moving towards the bow.

The bow has collapsed onto the seabed due to the blasting from salvers, the barbette of A turret and the underside of anchor capstan can be seen.

As you swim along the starboard side of the wreck you can take in the seven casemate guns which rest upside down on the seabed.

There's a large debris running alongside the starboard side of the wreck ship, consisting of wires blocks and davits although the main mast is missing, we can only assume it was taken by salvers.

At the stern the props have been salvaged, although the port prop shaft can still be seen, the two rudders still remain, one laying flat and the other in situ.

As we move forward the aft citadel, a 12 inch thick armour plate is exposed and well worth checking out. This 12 inch thick curved wall of steel spans from one side to the other, German engineering at it's finest.

As we continue to move forward we come to a two meter diameter hole, this is the barbette of D-turret.

After this we come to the engine room, four of the six turbines still remain and one of these can easily be backed into for that special camera shoot.

Just forward of this one of boilers can be seen.

Small shoaling fish, pollock and cod, ling, conger, lobster, edible crab and velvets, king and queen scallops, squat lobster, sea urchins, many different types of starfish, plumos anenomie, and a wealth of dead mans fingers of all different shape colours can all be found at this impressive wreck site.