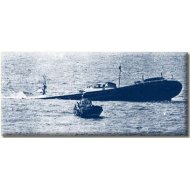 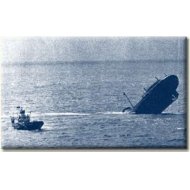 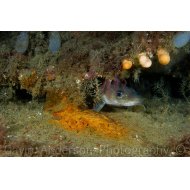 This is a steam fishing trawler laying in 40 to 44 meters of very clear tidal water.

Situated just off Hoxa Head, the steam to the wreck site is approximetely two hours from Stromness and needs to be dived at slack water.

She makes for an excellent dive and a big favourite for many.

The James Barrie with a crew of 21 was making her way through the Pentland Firth when on the 27th March 1969 she grounded on the Louther Rock . The crew abandoned ship unable to save the vessel.

In the early hours of the morning on the 29th March 1969 she was seen by the Pentland Skerries light-keeper to have re-floated and was adrift in the Pentland Firth.

The Kirkwall lifeboat Grace Patterson Ritchie was shouted along with two fishing vessels that were in the area, the Kildinguie and the Achilles.

The lifeboat took her under tow from the stern, but made little headway so the Kildinuie attached a line to the bow to straighten her up.

The James Barrie had been holed in the net store and the water was only held back due to the packed ice in the forward hold.

The vessel was now under tow and on her way to Stromness, when just off Hoxa head the ice that had been holding back the water had melted to such a degree that the water began to rush into the empty holds. The towing lines were quickly cut and she sank, bow first in less than 60 seconds.

As you decend down the shot line you can normally see the whole wreck laid out in front of you.

Resting on her starboard side and rising up to a depth of around 33 meters.

She is very intact with her hand rails still in place.

The propeller has been removed, the rudder lays on the seabed.

A very pretty dive covered in hydroids, dead mans fingers and plumose anemones. Shoals of caithe, pollock, cod and wrasse can all been seen.