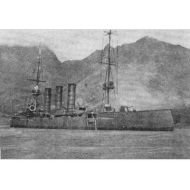 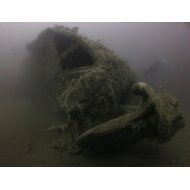 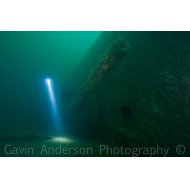 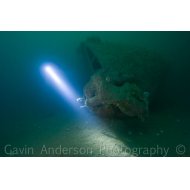 The Dresden lays on her port side at a depth ranging from 23 meters at the bow and down to 38 meters at the stern. From the surface to hull it's around 20-22 metres.

Fantastic dive for all levels.

SMS Dresden was a Cöln class light cruiser, one of only two ships of this class to be completed. The other was her sister ship SMS Cöln, which also lies on the seabed of Scapa Flow.

SMS Dresden was built by Howaldtswerke in Kiel and launched on 25 April 1917. She was a replacement for the earlier SMS Dresden, which was scuttled at Robinson Crusoe Island off the coast of Chile after the Battle of the Falklands in 1915.

Dresden and her sister ship SMS Cöln were completed during World War I.

Following Germany’s surrender in 1918, SMS Dresden became one of the last two ships interned in Scapa Flow. Owing to turbine failure SMS Dresden was unable to steam to Scapa in November alongside the rest of the High Seas Fleet. Instead the cruiser arrived in Scapa Flow on 6 December 1918, leaking badly.

There are normally two shot lines tied to this wreck, one over the stern tied in at around 26 meters on the starboard side over the aft guns and the other tied in at the bow at around 20 meters.

Normally the stern shot is the favoured starting point, descending down the shot line to the starboard side and continuing to descend down to the sea bed you will notice two 5.9 inch aft guns pressed in hard to the seabed, keeping the wreck on your left, you come past the aft capstan and then to the stern where the kedge anchor is still in place.

Turn around and swim back keeping the wreck on your right hand side you are now moving forward along the deck towards the bow, you will come to the small calibre 3.4 inch AA guns. After this you will notice a pile of white fire bricks which were used to line the decks above the boiler room. We then come to the bridge and the cylindrical Armoured Control Tower and the two forward 5.9inch forward guns.

The fore deck has peeled away from the wreck and is now laying almost flat to the seabed.

As you make your way up to the bows the depth has now risen up to 23 meters, the bows are now only a couple of meters proud of the sea bed, you will be able to see the two shields either side of the bows.

The anchor chain runs out over the tail end of a skerry which comes from the Barrel of Butter, the small island you can see in the middle of the Flow. It is so named because many years ago it was the payment to the laird of the land, a barrel of butter each year for the rights to hunt seals there.

Now if you follow the anchor chain you will notice it passes to the left of a large rock with a split down one side, at certain times of year there's usually a wolf eel living there.

Small shoaling fish, pollock and cod, ling, conger, lobster, edible crab and velvets, king and queen scallops, squat lobster, sea urchins, all different types of starfish, the bows and hull of the Dresden are an absolute garden and literally covered in an array of different types of anenomie and dead mans fingers.