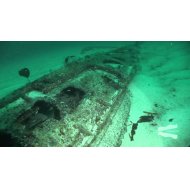 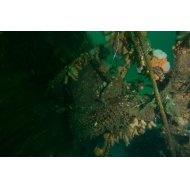 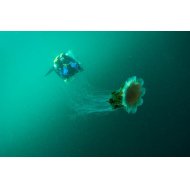 A truly memorable dive due to the crystal clear waters that surround, you can normally see the wreck laid out from just a few meters below the surface.

On the 12th March 1917 at 12.55, the E-49 left her base at Baltsound and passed though the south entrance and out of sight behind the island of Huney. People ashore heard a loud explosion and saw a huge column of smoke debris and water that rose high above the island.

A naval drifter was sent out to investigate and found navel caps and pieces of grating floating on the surface.

The area was buoyed and divers were sent down, they reported that the bow was completely blown off.

There were no survivors.

The wreck lays almost completely buried in clean white sand with its conning tower laying over to starboard.

The periscope extends horizontally approximately two meters above the seabed.

Aft of the conning tower is the submarines deck gun which lays on the seabed.

The aft section of hull gradually extends and disappears into the white sand.

There is another section of wreckage off to the starboard side, probably the remains of the bow section.

This wreck changes from year to year due to the shifting sands.

Dead man's fingers sea urchins and plumose anemones, pollock, cod and wrasse can all been seen.