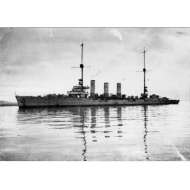 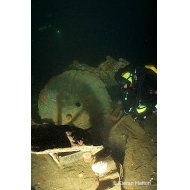 A nice easy dive for all levels with very little current.

The Brummer was a fast mine-laying cruiser and was more lightly armoured and less heavily armed than the light cruisers. She could carry 400 mines, two to four times that of the light cruisers and was extremely manoverable.

Now the word Brummer does not mean Bluebottle as mentioned in one of the books on Scapa Flow but actually means or refers to a flatulent sound perhaps made by a bee or someone passing wind.

In October 1917 the Brummer was one of two ships used to intercept a British convoy en route from Bergen to Lerwick. She was chosen for this job due to her high speed, and the fact that she resembled a British cruiser.

In preparation for the raid, the crew painted the ship dark grey to further camouflage her to look like a British vessel.

SMS Brummer arrived in Scapa Flow for internment in November 1918.

Keeping the wreck on your left and swimming towards the bow you will notice a raised deck hatch, forward of this you come to the two port and starboard capstans with their anchor chains wrapped around them and trailing out through the hawsers.

Turning around and keeping the wreck on your right arm moving back towards the stern past the capstans and then past the 5.9 inch gun you saw earlier you come to the bridge section with its armoured control tower and spotting tops. The bridge section fell off some years back and is now all pointing down towards the seabed with the handrails still in place.

Just behind the bridge keeping the wreck on your right arm and moving towards the stern you will see the second of the 5.9 inch aft guns.

Also just to the rear of the bridge is the mast, this supported the searchlight platforms and where one of the irises for the ship's searchlights can be seen laying on the seabed. It looks like a very large green camera shutter, you can't miss it.

The stern mast lays at 90 degrees from the wreck on the seabed.

The two 5.9 inch guns are in place and pointing aft.

The capstan and kedge anchor are still in place.