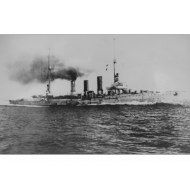 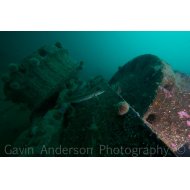 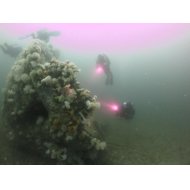 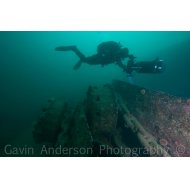 The Karlsruhe lies on her starboard side with a list of about 45 degrees, she rests in a maximum depth of 27 meters and raises up to around 16 meters.

She is the shallowest and most broken up of all the German fleet wrecks, but she is also the prettiest with lots of fish and marine life.

SMS Karlsruhe was a Königsberg class light cruiser, laid down in May 1915. She was named Karlsruhe after her namesake which sank in the Caribbean in 1914.

Karlsruhe was commissioned into the High Seas Fleet in November 1916. She served in the II Scouting Group alongside SMS Königsberg and Nürnberg. The ships patrolled the Heligoland Bight in the North Sea, protecting minesweepers against British light forces.

The Karlsruhe was the only one of her class that the Germans successfully scuttled as SMS Nürnberg and Emden were both beached by the British.

The wreck rests on its starboard side in 27 meters of water. This is the shallowest of the four cruisers. There are usually two shotlines one at the stern and the other tied in at the forward 5.9 inch guns.

So depending on which way the current is running decides which shot we use.

The bow section has two huge anchors that lie on the seabed, their chains run long the seabed and through the hawse pipes. The chains are wrapped around the two anchor capstans and the engines that drove the capstans are still visible.

Behind the capstans the two 5.9 inch guns have collapsed one on top of one another and point forward towards the bow.

Moving aft with the wreck on your right hand side you come to the armoured control tower which has fallen away from the main body of the wreck. The walls of the control tower are made of 4 inch thick steel.

The bridge has gone but was made of brass so as not to interfere with the magnetic ship's compass.

As with all the wrecks in Scapa Flow, the engine room was one of the prime targets of the salvage operations, bits and pieces of boilers, gearboxes, turbines, valves and wires remain.

As we come to the stern of the Karlsruhe she begins to look more like a ship, as you can see from the picture above she has a lovely cruiser stern and teak decking.

The propellers are gone but a single A-frame still remains, as dose the rudder.

The Karlsruhe is one of the best dives in Scapa Flow, and considered a favourite that many wish to repeat time and time again.

A very pretty wreck with good visibility and lots of fish life including pollock, cod, ling and conger, lobster and all different types of crabs, including edible crab, decorator, spider and velvets along with sea urchins and various types of starfish, plumos anenomie, and a wealth of dead mans fingers can all be seen in abundance. This is a particularly good wreck for king and queen scallops.