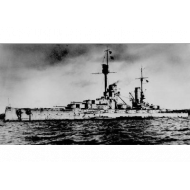 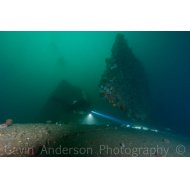 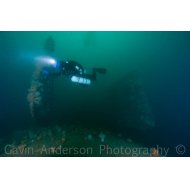 Probably one of the most impressive dives that you will ever do, rising from a maximum depth of 47 meters at the bow, to 24 meters at its shallowest. This really gets the scale of these things into perspective, with her twin rudders standing 3.5 meters high, this is probably Scapas most iconic wreck.

One of three Konig-Class battleships built in 1914 at a cost of almost £2.5 million.
Two years later in 1916 her six 3.4 inch guns below the bridge section were removed, allowing space for additional accommodation and for extra wireless rooms.
She took part in the battle of Jutland under the command of Kapitan Seiferling. During the battle she was hit by three 15 inch shells, the first two failed to explode, but the third tore a huge hole in her side, just aft of her stern turret.

There are normally two shot lines, one tied to the anchor chain that overlaps the hull at the bow and the other tied in at the stern in close proximity to the rudders which stand over three meters tall. Descending down to the seabed to a depth of around 44 meters, you can see the cruiser stern pressed in hard to the sea bed, you will notice the port holes. Keeping the wreck on your right arm you are now moving forward along the starboard side towards the bow. The aft gun turrets are no longer visible although the seven 5.9 inch case mates are all visible, although two are tricky to find and are easily missed.
You will also notice some fisherman's anchors on the seabed, these were used as mooring points by later salvers (Scapa Salvage & Metal Industries). Another key feature which is best taken in at the bows is the 6 inch armor belt, held in place by casting heavy bolts into the armor plate and bolting them to the sides. It really is an awesome sight to sit there at 47 meters, looking up at the bow fading into the sunlight.